Next month, I will be talking to a group of anti-war activists about the role of literary fiction in undermining the bad narratives that prevent critical thinking. I look to my favorite political satirist, Mark Twain, as an example.

When Huck Finn ponders whether or not he should turn in his friend Jim, a runaway slave, he is deeply conflicted. Good Christian society of the day has taught him that slavery is sanctioned by God. Huck truly believes that to help Jim escape would be immoral. But he decides, “All right then, I’ll go to hell.”

It’s moments like this in literature that serve humankind best in its often-halting progress toward tolerance and peace. Throughout history, good, decent people routinely condone revenge, segregation, greed, fascism and war, simply because they follow those they admire most. Every era has its own peculiar blindness, and going against complacency and conformity can be more difficult than directly confronting tyrants themselves. It is often a disenfranchised voice, such as Huck’s, that awakens the literature of a nation, makes it more self-critical. Sometimes the voice needs an author—a humorist, a poet, or a good story-teller—to help him speak in a way that he can’t be ignored or further ostracized.

Twain published his famous novel a generation after freedom had been won for the slaves, but the hypocrisy continued, and Twain revealed it to the public using a voice unusual in literature.  A “literary” writer uses language in unusual and often poetic ways to encourage critical and creative thinking. What we call “literary fiction” today is writing that is conversant with the literature of the past and questions the notion of narrative itself, as it questions the assumptions of the some of the dominant narratives of society. In contrast, “general fiction” and “genre fiction” tend to affirm stereotypes and prevailing narratives. Literary fiction strives to keep readers in a constant state of awareness of the process of meaning-making by putting it in the foreground. Literary fiction authors can help readers have greater empathy for their adversaries and to better understand themselves.

Unfortunately, much of today’s so-called “literary fiction” is dedicated to questioning the assumptions of Fox News audiences, institutionalizing the avant-garde, and lulling readers into voting for lesser evils with the soothing warm milk tone of NPR. Many of the best literary fiction authors today preach, quite beautifully, to the choir. But what crimes are the choir—the educated, liberal, progressive purveyors of culture—ignoring today?

In 2009, a poet I know, Tom Briedenbach, author of IXXI, told me (somehow, it’s important to me that the messenger is a poet) that the dust sample from ground zero he sent to a team of nano-chemists tested positive for high-tech, military-grade incendiaries. Our government—I’m very sorry to say this—decided not to test the dust for explosives. For whatever reason, this evidence of a larger conspiracy has been ignored. I knew that to write about these two indisputable facts (incendiaries detected, government didn’t test) could likely wreck my literary career. At the least, I, grouped in with “conspiracy theorists,” would be ridiculed by good, decent people.

So be it then.

I relinquish my seat at the table with the highbrow, the degreed, New York Times subscribers, the fit and traveled, that community of well-intended liberals—with whom I share reading lists and favorite subtitled films.

I’ve risked my career before. In fact, I’ve always written in the posthumous style, as if I had no reason to fear censure and derision. And so yes, now, I am scorned by people who have not given a second thought to what I have spent years trying to understand.

In my novel, Locus Amoenus, a 9/11 widow and her son, Hamlet, move to the country to start a sustainable farm. Eight years later, Horatio, who has had a ground zero dust sample tested, arrives to tell Hamlet that his new stepfather, Claudius, a government bureaucrat who worked on the World Trade Center towers report, is a fraud. The report, even Claudius admits to himself, is “nothing but a fermented blend of preconception and irrelevance.” As “conspiracy theorists,” Hamlet and Horatio are labeled nutcases.  Like Huck, they are marginalized and seen as socially unfit.

Case in point, Martha Frankel, of Woodstock Writer’s Radio, loved my novel; “genius,” she said, and she had me come in to the studio to record an interview last August. She asked, “What was it like, having to do all that research on conspiracy theory?” Apparently, she hadn’t realized that complacent readers like herself were the target of the satire, not the conspiracy theorists. I told her that, as a researcher who valued empirical evidence over speculation, I built my narrative strictly on the facts revealed by scientific analysis of dust samples and what was written in the government reports.

After the interview, she sent me an email,

I liked meeting you. But something s out our interview made me uncomfortable. And when I registered I realized I should have stopped you when you were talking  about the explosives.

It’s my inclination to be gracious, but I really can’t in any way support a “the towers Might have been set with explosives” theory. Not in any way.

Before I could respond, she followed up with,

Ooops. Sorry. Hit send too soon.
Am I wrong? Tell me you don’t believe any of that truther crap and I’ll run the interview.

I was not able accommodate Ms. Frankel’s request.  She did not run the interview. Like my Hamlet I decided, “When the world is crazy then it is the sane ones who appear to have lost their wits. Crazy it is then. Hysteria, be thou my sanity.”

Shakespeare’s play ends in a pile of bodies. Likewise, my Hamlet and his family are all dead (apparently) in the final scene, reported in the coda, which takes the form of a poorly written, factually inaccurate local newspaper article. The faux article reflects the dominant narrative today about 9/11 conspiracy theorists. Only ironically do I give the “good, decent” people of the world the ending they expected. What is reported in the paper is so very much out of tune with everything that has been related in the main narrative that no serious reader can accept it uncritically. By the time my readers get to the end of the novel, they have learned (I hope) that they cannot believe everything they read in the paper. Doubt is good, if it keeps you open-minded and encourages you to ask difficult questions.

The “War on Terror” has been based on false assumptions. It is creating terrorists where none existed before. True global security depends upon turning our attention from manufacturing weapons to supporting (as my Gertrude and Hamlet do, not incidentally) green energy infrastructure, local organic agriculture, and critical thinking in the schools.

I am grateful to my readers and reviewers who have opened their minds to this terrible news and recognized Locus Amoenus as an important anti-war novel. I am looking forward to the release of the audiobook, produced by 5 Films and read by Ben Jorgenson, very soon. With the exception of some few people, the reception has been extremely positive and Locus Amoenus continues to find new audiences among the good, decent people of today. 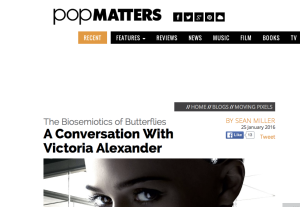 Artificial intelligence is all the rage these days. Case in point: while I was watching football this past weekend, there were two television commercials in heavy circulation during the games that featured AI avatars—Siri and Watson—having life-like conversations with actors.

As you may know, I have a few opinions about the prospects and limitations of AI. Recently, I had an email chat with novelist and philosopher of science Victoria Alexander about AI, art, and chance. Alexander’s work focuses on the uses of chance in nature and in fiction and the changing conceptions of chance in science, religion, and art. What follows has been lightly edited for clarity. END_OF_DOCUMENT_TOKEN_TO_BE_REPLACED

Activist/archivist Johny Genlock recorded my talk at Dunn Brothers Coffee in Dallas area on Nov 29  for his YouTube Channel.

“A Fictional account combining elements of our post 9/11 culture of conflicting realities and the plot of Shakespeare’s Hamlet; set in a small town environs of New York State. Locus Amoenus, a “safe place”, turns out to be anything but! Victoria Alexander gives us samples of the book while explaining the elements that went into the creative project.“

The new novel by Victoria N. Alexander, Locus Amoenus, is a delight to read. It weaves an important modern-day tale while following the outline of William Shakespeare’s enduring tragedy, Hamlet. The Bard’s tale of Hamlet is a personal and community tragedy placed in a historical period in which the fight over the control of Hamlet’s native country ultimately leads to its subjugation to a foreign country. The characters woven into the Locus Amoenus story are no less tragic than Shakespeare’s, and the reader is left wondering just how the world of Alexander’s characters could have avoided being seduced into a current-day form of subjugation when the curtain comes down. Throughout her witty narrative, the author’s wry humor adds levity to her tale of today’s Hamlet. END_OF_DOCUMENT_TOKEN_TO_BE_REPLACED 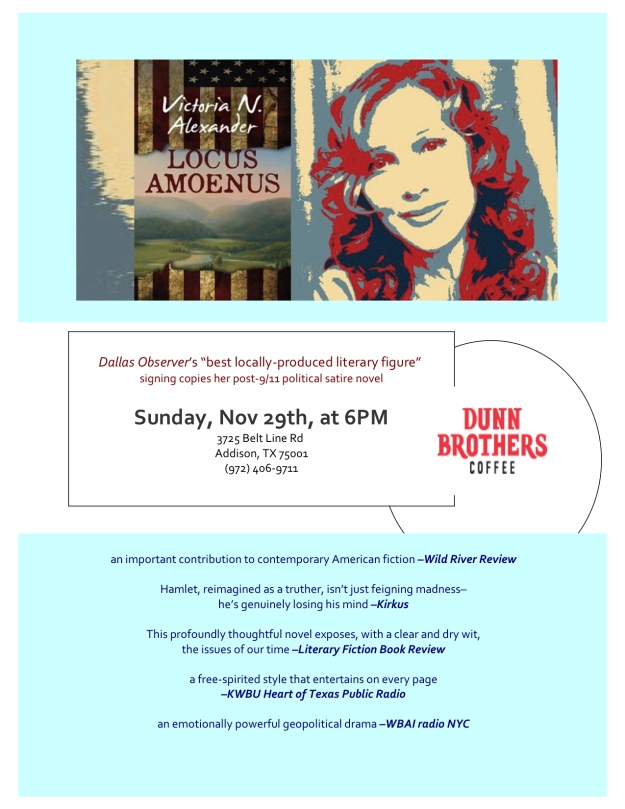 Reviewers are calling Locus Amoenus, “one of the funniest political satires of our time,” the 2015 novel that “everyone needs to read,” and ” a great book you will want to share with your friends.”

Brave New Books  is “an amazing community of diverse and active people. We have politicos and anarchists, lefties and conservatives, but most importantly we are a bunch of curious people on a quest for the truth.”

Locus Amoenus synopsis: In this dark comedy, a 9/11 widow and her son, Hamlet, have retreated from Brooklyn to the idyllic rural countryside upstate, where for nearly eight years they have run a sustainable farm. Unfortunately their outrageously obese neighbors, who prefer the starchy products of industrial agriculture, shun their elitist ways (recycling, eating healthy, reading). Hamlet, who is now 18, is beginning to suspect that something is rotten in the United States of America, when health, happiness and freedom are traded for cheap Walmart goods, Paxil, endless war, standard curriculum, and environmental degradation. He becomes very depressed when, on the very day of the 8th anniversary of his father’s death, his mother marries a horrid, boring bureaucrat named Claudius. Things get even more depressing for Hamlet when his friend Horatio, a conspiracy theorist, claims Claudius is a fraud. The deceptions, spying, corruption, will ultimately lead, as in Shakespeare’s play, to tragedy. END_OF_DOCUMENT_TOKEN_TO_BE_REPLACED

Victoria N. Alexander, Ph.D., is a literary fiction novelist who writes about censored and controversial subjects with audacity, humor, and compassion. Bravely working to overcome complacency and conformity and to promote critical and creative thinking, tolerance and peace, she uses Huck Finn’s infamous statement of resolve as her writing motto: “All right then, I’ll go to hell.”
Her first screenplay, "Terrordise," a dark comic critique of the surveillance state, is now complete and cautiously courting film agents.
Alexander is also a philosopher of science. She is a Rockefeller Foundation Bellagio Center alum, a Public Scholar for the New York Council for the Humanities and a director at the Dactyl Foundation, working on new and emerging concepts in science and encouraging interaction between the sciences and the arts. She serves on the editorial boards of Biosemiotics journal (Springer Publishing) and Meaning Systems book series (Fordham University Press). Her latest work on the surprising non-utilitarian evolutionary mechanisms behind butterfly mimicry will appear in March 2016 in Fine Lines: Nabokov’s Scientific Art, published by Yale University Press.
Her fiction is published by The Permanent Press. See full CV.